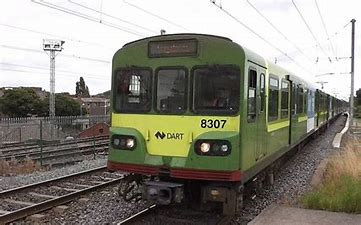 Ireland has secured €8.8 million in funding from Europe to go towards Dart expansion project in Kildare

The money – granted under the EU’s Connecting Europe Facility – will go towards the design phase of the upgrade to the Kildare Line.
The Dart expansion programme was allocated €2 billion under the State’s National Development Plan 2018-2027.
Under the plans, it said it will offer a faster, reliable rail system and increase the frequency and capacity of trains.

It is also proposed to deliver new Dart services between Dublin city centre and Drogheda, Maynooth and Celbridge. It’s estimated it could increase customer capacity from around 26,000 passengers per hour per direction last year to 50,000-60,000 at its peak under the planned investment.
Minister for Transport Eamon Ryan said the new plans would facilitate an “important reduction in greenhouse gas emissions and a shift towards a climate resilient society”.

He said: “For the Kildare line, the project will facilitate more services, greater capacity and electrification, as well as enhancing the infrastructure into Heuston Station – one of the busiest rail corridors in the country. ”