NBRU call for immediate clarity on Transport Funding, following reports this morning that CIÉ will soon run out of cash 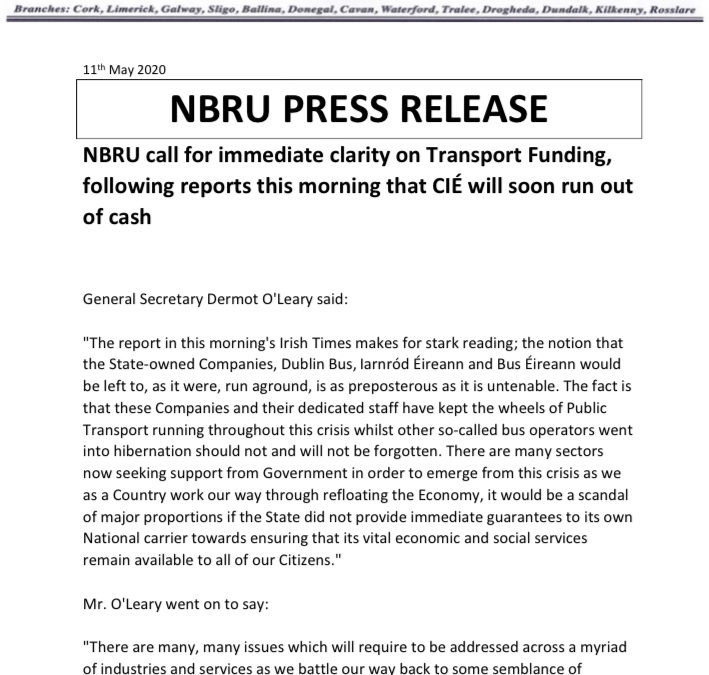 11th May 2020
NBRU call for immediate clarity on Transport Funding, following reports this morning that CIÉ will soon run out of cash
General Secretary Dermot O’Leary said:
“The report in this morning’s Irish Times makes for stark reading; the notion that the State-owned Companies, Dublin Bus, Iarnród Éireann and Bus Éireann would be left to, as it were, run aground, is as preposterous as it is untenable. The fact is that these Companies and their dedicated staff have kept the wheels of Public Transport running throughout this crisis whilst other so-called bus operators went into hibernation should not and will not be forgotten. There are many sectors now seeking support from Government in order to emerge from this crisis as we as a Country work our way through refloating the Economy, it would be a scandal of major proportions if the State did not provide immediate guarantees to its own National carrier towards ensuring that its vital economic and social services remain available to all of our Citizens.”
Mr. O’Leary went on to say:
“There are many, many issues which will require to be addressed across a myriad of industries and services as we battle our way back to some semblance of normality, all Stakeholders will need to be consulted. Public Transport will not be an exception. Bus Éireann’s Expressway service has been highlighted in this
NBRU PRESS RELEASE

morning’s story as to being under threat, yet it remains practically the only so- called Commercial service which continues to operate amidst the Covid crisis, serving over 40 Hospitals, a plethora of other medical services and has maintained a vital link into almost every nook and cranny across the Country. The NBRU has for years, been warning that the saturation of the inter urban Motorway Bus market with excessive capacity was designed to undermine Bus Éireann’s ability to maintain its Expressway services. The fact is that quite a large number of these services are essential Social services that need State support to be able to serve the areas that large multinationals have no interest in serving. This Country needs a Government to Govern, leaving decisions on vital public services in the hands of unelected cabals and Quangos is simply unacceptable. The NBRU will not, under any circumstances, entertain the notion of job losses as a result of decisions made by faceless bureaucrats. Our members and their colleagues have demonstrated that service to the public is at the core of what they do, that is what they want to continue to provide. Now is not a time for uncertainty around Transport provision.”