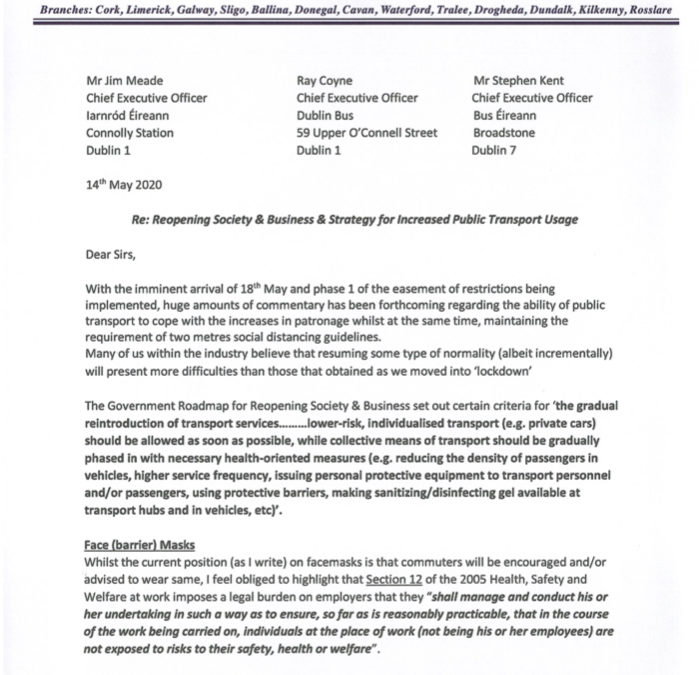 Re opening of Society

With the imminent arrival of 18th May and phase 1 of the easement of restrictions being implemented, huge amounts of commentary has been forthcoming regarding the ability of public transport to cope with the increases in patronage whilst at the same time, maintaining the requirement of two metres social distancing guidelines.

The Government Roadmap for Reopening Society & Business set out certain criteria for ‘the gradual reintroduction of transport services………lower-risk, individualised transport (e.g. private cars) should be allowed as soon as possible, while collective means of transport should be gradually phased in with necessary health-oriented measures (e.g. reducing the density of passengers in vehicles, higher service frequency, issuing personal protective equipment to transport personnel and/or passengers, using protective barriers, making sanitizing/disinfecting gel available at transport hubs and in vehicles, etc)’.

Whilst the current position (as I write) on facemasks is that commuters will be encouraged and/or advised to wear same, I feel obliged to highlight that Section 12 of the 2005 Health, Safety and Welfare at work imposes a legal burden on employers that they “shall manage and conduct his or her undertaking in such a way as to ensure, so far as is reasonably practicable, that in the course of the work being carried on, individuals at the place of work (not being his or her employees) are not exposed to risks to their safety, health or welfare”.

The same statutory onus is in place regarding the duty of care to your employees under Section 8 in that you “shall ensure, so far as is reasonably practicable, the safety, health and welfare at work of his or her employees”.

It is reasonable therefore, to expect that an action that has been adopted in many many Countries (compulsory facemasks on public transport) is an appropriate intervention, consistent with both Sections of the Act referenced above.  For the record, the NBRU position is that Face (barrier type) Masks should be compulsory for all commuters.

Suffices to say, the onus should not be placed on frontline staff that are operating the services to supervise, the potential for conflict would rank extremely high in such circumstances.

Evidence furnished to the NBRU points to certain areas on Dublin Bus Network where already (in advance of easement measures) commuters are being left behind (see attached).

Iarnrod Eireann services also reporting some slight increases to passenger numbers, the 16.30pm train from Heuston to Galway today had sixty-three passengers on board, with seating capacity of fifty.

Bus Eireann continues to be a source of concern, not least across the fleet with no protective screens, the issue of cash handling has more or less been managed on the basis that there is little if any being used, that itself is going to change as we ease our way out of lockdown, we need clarity on how drivers are expected to manage.

There was considerable media reporting of Gardaí boarding Buses and Trains during the ‘lockdown’, have the Companies, or to your knowledge the NTA, made any requests to An Garda Siochana to assist with policing public transportservices through the easement period/s?

The Government did, in its Roadmap Document, indicate that consultation would play a major role, ‘the Department of the Taoiseach will arrange for a process of consultation through relevant Departments which will assist to flesh out how the Public health Framework can be implemented effectively and safely across different sectors of the economy with an initial focus on measures to commence in the first phase of easing restrictions’ (my emphasis).

The meeting of the CIE Group of Companies and the Trade Unions on the 16th March was constructive in setting the tone for a collaborative approach on how we would deal with going into ‘lockdown’. This meeting was initiated by the NBRU following our Emergency National Executive meeting on the 15th March, we had written to the NTA on the 9th March seeking an engagement, representative colleagues also wrote to the Authority.

The date on this correspondence would reflect the fact that over nine weeks later, we are still waiting on the opportunity to be directly involved in the decision-making process. There is a lot at stake here, lots of moving parts, lots of different agencies and bodies involved, it is simply not good enough that the workers on the frontline would be marginalised.

Relying on the carefully woven together employer/trade union industrial relations processes is all fine and dandy, but only to a point, we are now on the cusp of moving into unchartered waters, we have looked askance at what has happened in London, we console ourselves by saying that this would never happen here. But who says it could not? Who says that the 18thMay, or June 8th/29th, July 20th or August 10th will not present us with some of the problems witnessed in the UK?

On one hand, we want to instil confidence in Citizens to return to Public transport, on the other, we are terrified that the day may come as we work our way through the incremental phases of lockdown easement, that to many people will garner more and more confidence to return in ever larger numbers.

It is not so long ago that RTE’s Prime Time was pointing cameras in our direction, highlighting the lack of capacity and the sardine like commute of hundreds and thousands of passengers onboard our trains. Buses in Dublin reporting similar capacity constraints.

I make the point in the foregoing two paragraphs, not to be alarmist or fatalistic, but to point out the frustrations of our members and their colleagues on the frontline, the questions (quite rightly) have been coming thick and fast over the last number of days. Whilst some of our answers are based on empirical evidence, others are very much based on hearsay and opinion.

I will finish on this note, I referenced the industrial relations processes above, I did so to illustrate that they have served all of us reasonably well thus far, however, they can only stretch so far, the current climate in which we operate is not IR territory in the way we know it, it is very much a health environment, Public Health and the Health and Safety of workers will take precedence in the decision making process of the NBRU over the coming weeks and months. Our policy at all times will be to err on the side of caution.

I trust that you, along with those copied below, will give this correspondence careful consideration and will, given the gravity of the issues it contains, respond in an expeditious manner.